It's that time of year again: Summer (or Winter, depending on where you are) is drawing to a close, the temperature is falling (or rising), and nighttime is stretching a few minutes longer (or shorter) every day. That's right, it's time to prepare for Nerd.Nu's 2021 Annual Semi-Charity Fundraiser! Just like last year, we'll be splitting the proceeds 50-50 (all Paypal fees being paid by us, of course) with Child's Play, a charity which donates toys and video games to children in hospitals around the world.

Full details will be forthcoming, but here's what you need to know for now:

We're being tight on details involving the theme for now, but the setting will be a vast, ruined city. And what good is a city without buildings? Starting right now, a world has been opened on the Creative server where you can claim a plot and help add your own personal touch! On the Creative server, type /warp skyscraper and you'll be taken to a world with large plots. Simply stand in an open plot and type /nerdplot claim to get started.

The snapshots server will be returning soon with 1.18 snapshots.

TL;DR There's a snapshots worlds download from Dec 2020, and we're planning on giving you the snapshots server back with a blank canvas as soon as the 1.18 snapshots arrive in the launcher and we consider them stable.

It has been over 6 months since the snapshots "chaos" server has run. It has been a long wait, and I think it's proper to explain why.

Snapshots was initially conceived as a low-stability "no promises" pure vanilla server, with no final map download to be offered. However, you the players built nice things and got quite attached to the world, so we committed to offering a final download and resolved to try to keep continuity of the world, if at all possible.

The new nether generation in 1.16 led us to consider how best to integrate new terrain generation. pez252 looked into minimising the world size by discarding chunks with only a few minutes of load time using mcaselector. But then Mojang threw us for a loop and started changing the overworld terrain generation in 1.17 snapshots. If we had run the server on those snapshots, we probably would have locked the world out of future updates, because Mojang made no guarantees about compatibility.

We also considered the effect of upgrading the current overworld to incorporate the new caves and cliffs. We concluded that the new terrain generation would produce very unsightly discontinuities (flat walls at chunk boundaries) and that we should reset the world completely when the Caves and Cliffs Update terrain generation arrives.

As you may be aware, in the last day, a new experimental 1.18 snapshot was published by Mojang. It is not yet available in the launcher. You have to download it via the link they provide. It looks awesome, but it's still somewhat tentative, so we're going to hold off on running snapshots with it until it has settled a little bit. We think that when Mojang are confident enough to offer it in the launcher it will be about ready to offer it to you. That might depend on what Mojang does about the performance. We know that 1.17 currently needs a lot more RAM than 1.16. We expect further increases on server resources in 1.18, since the world will be 50% taller.

The main events of the 2020 Nerd.Nu Semi-Charity Skyblock Fundraiser have come to a close! The Creative and PvE Servers are up once again. Both have been updated, and are now running on 1.16.4! The Event server is also still running for now, so those of you who missed out will still get a chance to claim an island and experience Skyblock. While the main events are over, you may still collect the Scavenger Hunt items and /modreq to win 8CC. All Spawn traders are still open as well. E.nerd.nu will remain open for at least 2 weeks - think of this as a potential trial run for something more long-term.

We'd like to thank everyone once again for their outstanding generosity, especially during this particular year. At the time of this writing, the donation total on Nerd.Nu/donate is now $4323.30! That is by far the highest total in recent memory! As advertised, we will be donating a full 50% to Child's Play, which at the time of this writing is a whopping $2161.65!. All PayPal fees will be coming come out of Nerd.Nu's share, making the community's total $1980.53. We are absolutely blown away by your kindness! After this year's drive, we have enough funding to pay for server costs through December 2021 and beyond! 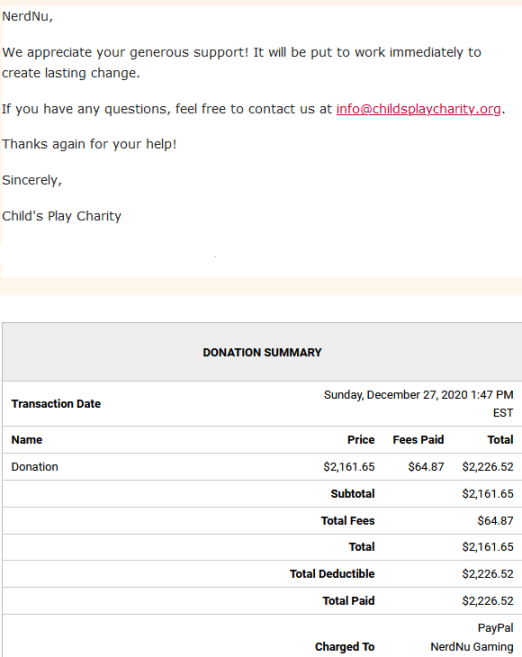 In addition to all of you who've donated your time and money over the weekend, we'd also like to thank the staff who've helped make this event possible: Firstly, major credit to totemo, who suggested we do Skyblock in the first place, and worked hard to get the server up and running (and keep it that way.) Big thanks also go out to Deaygo, for maintaining our Donate page, and implementing the donation announcements you saw on the server and on Discord during the weekend. Lastly on the tech team, we'd like to give a shout out to Challenger2, whose NerdPlot plugin made island-claiming possible, and who helped run Saturday Night Spleef. In addition, please thank pez252 for creating Spawn Island, the bulk traders, and all of the individual player islands; defiex for her wonderful tweets, announcements, and her work on the warp sign wall; fazaden for working out the trades and their ratios, setting up the Trading Hall, FFA Spleef, and PvP arenas, and coordinating the minigames and events during the fundraiser; Bluuefuzzy for building Thimble, the park, and the beautiful Trading Hall's tree; buzzie71 for building the fantastic 1v1 Spleef arena; King_of_queso for his road design; assasymphoni and zburdsal for their landscaping; and everyone else on the mod team who added their little touches to Spawn.

Now, for the moment you've been waiting for: the Contest winners!

The community votes are in! Here are the results for Individual islands:

And here are the Group island winners:

(For judging purposes, an Individual island has only 1 owner, and no region members. A Group Island has more than one person on the same region.)

After the close of regulation Event time, the Head Admin team diligently went from island to island, and counted up every last Cobblestone, RC, CC, and PC in your starter chests, and we can now reveal the results! Overall, the community managed to collect and store currency equivalent to 39,962,484 blocks of cobble! Here are the top three collectors, in both the Group and Individual categories:

Over 6,440 kills happened in the Nether, including:

Thank you all for playing, and enjoy the rest of your year!