We've got builds, why not stories? 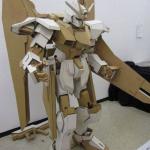 By ROCKONN,
September 12, 2013 in General Discussion